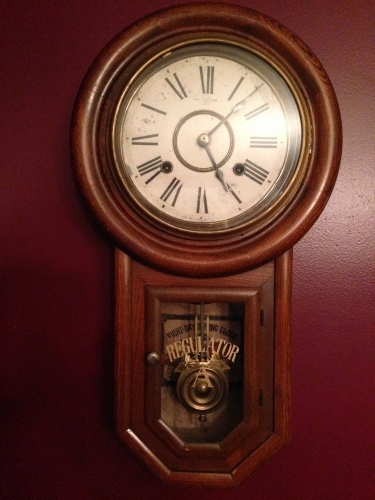 We have a Regulator D, eight-day clock with Roman numerals that hangs in our dining room. It’s from an old school house. It chimes on the hour and keeps rather good time (when I am careful to make the right adjustments, and dutiful in keeping it wound). However, from time to time I forget to wind it, and it needs to be reset. That’s easily enough done. Just open the face of the clock and gently move the minute hand forward through the hours until the current time is reached, always being careful to pause at 12 o’clock to allow each hour to be struck in succession. It is extremely important that the hands be moved forward, even if that means slowly moving them through all of the past hours to get to the present moment. To move them backwards could easily damage the clock’s mechanism.

The face of the clock is worn. It gives ample evidence that I’m not the first to reset the clock by sweeping the minute hand on its appointed round. My mother did it before me, and my father before her. (He was the one who bought the clock many years ago: through a magazine ad as I recall.) Before him uncounted and unknown school teachers, or perhaps the students of those teachers (if they were very good) set the time in their time. And who will set it next? We each move the hands forward in our own time, for our own time.

Einstein proved that time is real; it is, in a sense, a thing. It is an integral part of the created order. Einstein demonstrated what the faithful had intuited. To understand that time is not just an artifice of human thought, is to understand that creation itself is not a fixed “thing.” This, in turn, suggests that instead of referring to “the created order” a better expression would be “the creating order” as the process of creation is ongoing. Time then is, itself, part of, and plays its role in, the unfolding created order.

Time passes. Who will wind the clock? Who will set its hands? For it will be wound and its hands will be set, for it measures that which is real.

We, whose turn it is now to move those hands to keep the time, in our time, for our time, can not, and should not, attempt to control those whose turn will come in their time, to mark the time. Yet it is our duty, it is our privilege, to do all in our power to be as certain as possible that the time we pass on is as accurate to the truth as we can possibly make it. For the gift of time that we have received will soon be theirs to treasure, and in their turn, to hand on.