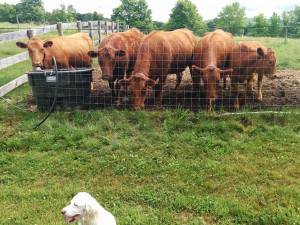 “The native home of the Dexter is in the southern part of Ireland where they were bred by small land holders and roamed about the shelter less mountainous districts in an almost wild state of nature. The first recorded knowledge of Dexters in America is when more than two hundred Dexters were imported to the US between 1905 and 1915. In recent years there has been a worldwide surge of interest in Dexter cattle. They thrive in hot as well as cold climates and do well outdoors year round, needing only a windbreak, shelter and fresh water. Fertility is high and calves are dropped in the field without difficulty. They are dual purpose, being raised for both milk and meat. Dexters are also the perfect old-fashioned family cow. Pound for pound, Dexters cost less to get to the table, economically turning forage into rich milk and quality, lean meat…”

There are two varieties of Dexters, short legged and long legged. Milk and beef production and other characteristics are generally the same for both types. Dexters come in Black, Red or Dun. Dexters are horned or polled, with some people preferring to dehorn them.”

“A milking cow can produce more milk for its weight than any other breed. The daily yield averages 1 to 3 gallons per day with a butterfat content of 4 to 5 percent. Yields of cream up to one quart per gallon are possible. The cream can be skimmed for butter or ice cream.”

“Animals mature in 18 to 24 months and result in small cuts of high quality lean meat, graded choice, with little waste. The expected average dress out is 50 to 60 percent and the beef is slightly darker red than that of other breeds.”

“The origin of the Dexter is quite obscure. The common assumption has been that the Dexter breed was derived from the Kerry breed or that it was a cross between the Kerry and some other breed, perhaps the Devon. It has also been claimed that a “Mr. Dexter”, agent to Lord Hawarden, was responsible for developing this Irish breed by selection from the “best of the mountain cattle of the district”.

In January 1887, the “Farmer’s Gazette” of Dublin published the first register of “Pure Kerry Cattle and Dexters” in Ireland. This first Register included 46 Kerry bulls, 100 Kerry cows, and only 10 Dexter cows. It did not include any Dexter bulls. The Royal Dublin Society acquired rights from the publishers of the Farmer’s Gazette for this Register. In 1890, the cattle with the original numbers assigned to them, were thus included in Volume One of the “Kerry and Dexter Herd Book”, as published by the Royal Dublin Society in Ireland….”

Dexter cattle have steadily increased in popularity in America