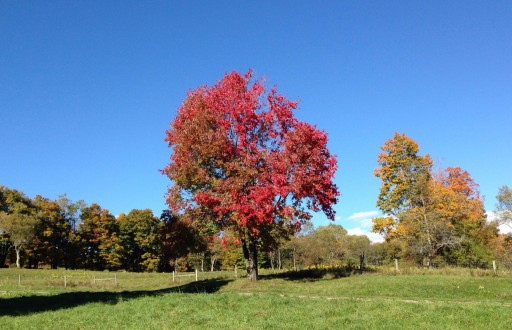 Trees, in the fields of our northern Catskill mountain farm, in a pasture or a hayfield mean one thing; rocks: Big ones.

As picturesque as such trees are, the reason they are there at all is that, at their base is a rock so large that the most determined efforts of a long ago farmer were not enough to move it. This is doubly remarkable because those farmers’ capacity to remove stone was prodigious. Scholars have estimated that the eastern United States contains approximately 259,000 miles of stone walls. That’s enough to circle the globe ten times. These stones were gathered and the walls built almost exclusively with muscle power, mostly human and bovine, sometimes utilizing the creative use of leverage, and ingenious lifting devices. Therefore, to encounter a rock that could not be moved; that’s something. It could mark a place where Mother Earth herself pokes a bony fist out of the ground or, equally possible, it marks the place where a just really big rock got deposited by some ancient ice sheet. However it got there, there it is, and there it is very likely to remain until the next ice sheet grinds its inexorable path across the land.

The trees create a micro environment. In their trunk and branches beetles burrow, birds build their nests and hawks roost in hopes of spotting their next meal. Plants, weeds invariably, that would be mowed down, and competed out of existence in the surrounding field, flourish at their base. And beneath the weeds the rock itself: the bolder that anchors the whole. And beneath the rock the tunnel homes of ground hogs, field mice, voles and a myriad of other creatures.

The trees themselves survived depending largely upon the vagrancies of seeds dropped and saplings nibbled. Often the surviving trees are simply deeply stubborn stragglers admirable largely for their tenacity. Gnarled wild cherry trees are most common in our fields. There are, as well, the odd few elms, surviving in their isolation, or perhaps because of their isolation. Others are maples and more than a few are apples. Occasionally, however, amongst these ordinarily ragged survivors, one finds a truly magnificent specimen that, through the decades has somehow avoided both the deer’s palette and the farmer’s ax. In any case they stand out from the surrounding field, protected from what may come by the rock in which their roots are anchored.

They remind me of some people: People who, because of the firmness of their grounding, stick out in the field. Sometimes that sticking out is little more than a testimony to orneriness. At other times it is a witness to greatness. I suppose that the promise of the latter justifies the risk of the former.