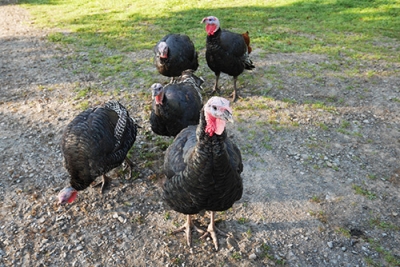 Friday I took my five Bronze Turkeys to be butchered. It was hard.

Turkeys were an after-thought on our farm. On a friend’s farm I saw one and I thought how interesting the turkey was, just regally strutting around, as turkeys (I have learned) tend to do. So this spring I bought six day-old poults. One immediately died, but the other five thrived.

Turkeys are not like chickens. Turkeys have presence. When I’d go out to feed them (they were free range) they’d usually come to meet me as a flock, sometimes walking, but often flapping excitedly to greet me. Not unlike a bunch of gangling puppies. They were messy (rather like having five fair sized dogs doing their business wherever they chose) but definitely interesting. They had character. They were unafraid. It was not at all hard to reach down (and over the months that became decidedly less of a reach) and pet them. They would move away but at a stately pace.

I didn’t mention it to them, but they were to be, and will be, Thanksgiving Dinner in more than one household.

Taking them to be butchered was, as I said, hard. They were trusting and didn’t expect to be put into a crate on the back of a pick-up truck and driven away. But that’s what happened. That is what happens, or something akin to it, whenever we eat meat. Creatures that have come to rely on us are, taken to the slaughter house. As one rancher said of cattle, “they have an absolutely wonderful life, with one really bad day.” The turkeys I took to slaughter simply would not have lived at all – they would never have had the run of this little farm for six months, if their purpose for being was not to have been eaten. They did not make that choice “we” did.

But of this I can be certain: when I carve my Thanksgiving Turkey this year I will have a profoundly deeper sense of that for which I give thanks.