The Birth of a Calf: A Miracle to be Sure 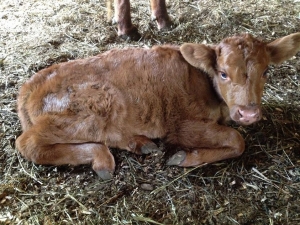 Chanel (though I didn’t name her; that really is her name) had a calf early on Labor Day.  When I checked on her Sunday evening she seemed her usual very pregnant self. She had missed what I thought was her due date by a week. Since she was naturally covered (bred by a bull in the field) I figured I might have missed her heat cycle and therefore was off on her due date by 21 days. However, when I went to feed her Monday morning, there he was, the calf; walking around nonchalant as could be. No sign of the struggles of birthing, nothing at all. Everything looked pretty much as it had the night before but now there was a new calf in the pen. A new life. A new member of the bovine family walked this planet earth. A pretty common event to be sure, but still a wonder: a miracle. A miracle that stock farmers, among others, are privileged to witness with some frequency. But however frequent, it remains a wonder, a true miracle.

The popular view of miracles is that they are a kind of divine magic, a supernatural breaking of the laws of Nature. This view made perfect sense in a pre-scientific age. When people didn’t know about the laws of nature anything that seemed to be at odds with what they might normally expect would be considered a wonder, or a miracle. Thanks to scientific advances over the last four or five hundred years, most of us accept and understand that the world as we know it follows strict patterns that we refer to as the laws of nature. For some, perhaps for many, those laws exist, complete in and of themselves, free floating, as it were. For others, myself very much included, those laws, those patterns, represent the mind of God in action.  It is my belief that all that is, seen and unseen, visible and invisible, has been, and is being, created by God. God created the patterns of nature out of beauty and goodness, to bring about beauty and goodness. These patterns, these Laws of Nature (if you will), are God’s own created and chosen instruments to bring about the Divine Will. A real miracle is then, not the breaking of one of these Law, but rather the simple existence of the Laws themselves. This is not to say that I believe that the laws of nature have never been, or ever are breached. (I think for example of the birth of Jesus, the Incarnation.) It’s just that those breaks are vanishingly rare. If they were not so rare then the scientific method as we know it would not be possible, and the opportunity to learn more deeply about the fundamental nature of creation would be forever hidden from us.

The miracle is that there is order not chaos. The miracle that surrounds us, upholds us and confronts us daily is that there is a pattern of being in the first place. The wonder, the miracle that can so profoundly touch our lives, is the gift, the capacity, the sight, if you will, to glimpse in the working of these patterns the Hand of God moving in our world, and in our own life.

The birth of a calf: a miracle to be sure. It is enough.