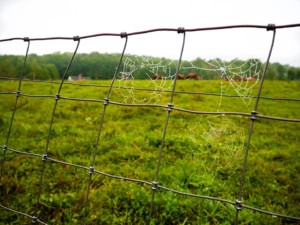 I was in the barn doing evening chores when the rains came.  I waited for the downpour to stop. As I waited, contemplating the deluge that pounded on the barn’s roof so hard that I felt like I was inside a steel drum I thought, now this defines what it means to say “it was raining buckets.” But that was incorrect.  It wasn’t raining buckets. It was just rain. Rain drops in their millions pounding the earth on a hot summer’s afternoon. So far as I could see there was no wind at all. I heard no thunder. Saw no lightening. It was just rain. Rain falling  straight down. Hard. Fast. Tree leaves fluttering, branches bobbing, grass bent.  Rain. Rain so heavy, so thick, that I could hardly see the house 30 yards away. But I could see my driveway, my very expensive new gravel driveway washing slowly away. Rivulets developed rapidly, filled with cloudy watery they carried away the powdery silt from between the larger pieces of gravel and then all too quickly the gravel itself began to move.  Tiny Grand Canyons carved in a matter of minutes.

Wind, blinding flashes of lightening, earth rattling thunder would have made things more dramatic, and would have appeared to be more powerful, but that would have been only things as they appeared to be on the surface of things. The actual, and profoundly effective actor in this drama of creating a changed landscape was water; flowing water, the result, the fruit if you will, of all those tiny rain drops. Raindrops collecting in their millions into the puddles, pools, rivulets, streams and rivers, that carved their way to the ocean changing the face of the land forever: each drop by itself being nothing more than that, a single droplet. Perhaps a promise of things to come, yet in itself nothing more than: a hint of what might be.

It struck just how much we are like that droplet:  By ourselves alone not terribly powerful. At most a hint of what might be. But together, given time, we can move mountains.