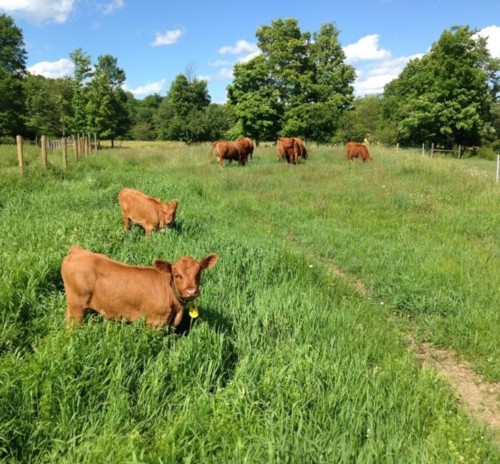 Bed Straw (Galium aparine) is a pernicious weed that has few immediate agricultural uses. Though it greens up early in the spring and therefore, from a distance, makes for an attractive looking field in its mature stage (which comes very quickly) it is not enjoyed by cattle. It is a real pain for farmers. It gets its name (actually one among many) because the little hooks on the stem make it form a kind of springy mat that once was used to stuff bed mattresses. An ancillary feature is this very propensity, combined with its pattern of growing up and over other grasses, is to form a kind of living mat that can overwhelm many grasses and creates a real challenge when making hay. It tends to get tangled up in the equipment, never mind trying to pick-up manure piles with a pitchfork. Hand weeding it in a garden is no problem because bed straw is shallow rooted. However, getting rid of it in a whole field is a real challenge. And it is a challenge that must be met as it spreads aggressively. It flowers early and often.

Bed straw came to mind when I reread the Parable of the Sower in preparation for a sermon recently. Oh, how it does spring up to strangle (shade) the good seed. That thought was further expanded when talking to a colleague about his work. He mused that in weak moments he sometimes wished that he could remove the weeds from the parish community he served as efficiently and effectively as I could remove the weeds growing in my field. Being a gentle soul he immediately rejected his own suggestion, but it got me thinking. How does one go about removing the bed straw from a field, and does that have anything to teach us about other arenas of our lives?

There are several options to remove bed straw from a field. One is to simply start over, or at least try to: spread herbicide and kill everything in sight, till the field, and plant the grasses that you want, and hope for the best. There are problems with this approach. First, it is expensive. It has a dubious impact on the environment and you end up with a field of grass that is “artificial,” in the sense that it has been wholly imported from some distant place to the very particular place that is your field. A second approach is a good deal slower but it has the advantage of working with what your field already is and has. This approach involves feeding the soil by adding lime which changes the soil chemistry from overly acid to one that is better balanced, and in that sense healthier. Since bed straw prefers a more acid soil this newly found health will tend to reduce the bed straws ability to overrun the field. The second part of this strategy is to cut the field multiple times over the course of the summer, early, mid and late. This frequent cutting prevents the bed straw from flowering (and producing seed) and, since bed straw is an annual this strategy greatly reduces its ability to spread. In turn, this allows the other grasses that you want to thrive. As those grasses flourish they further shade out the bed straw. Though this treatment can require a couple of years to be fully successful the benefit to the farmer is that in the end less money is spent, no damage to the environment. The object of the exercise is not to eradicate the bed straw, it is rather to nourish all the grasses of the field in order to return it to balanced health which, in turn, is reflected in the development of a wide variety of plants which each play their proper role as a vital part of the whole. It is crucial to bear in mind that the object of the exercise is to have a healthy field, and a healthy field is a field filled with as wide a diversity of grasses as possible. It is that diversity which will enable the field to thrive in the wide variety of circumstances that it will inevitably encounter over the years. A field that is dominated by any one variety of grasses is either unhealthy (for example having been disturbed by excavation) or maintained in an artificially sustained environment (for example having been maintained by the regular use of pesticides).

If one thinks of this in terms of a community of people rather than a community of plants many parallels emerge. However, several crucial qualifications come immediately to mind. The first is the basic reminder that there is nothing inherently “bad” about a weed.  A “weed” is simply a plant in place where it is not intended to be. The grasses between the bricks on my patio are weeds, while I go to a lot of trouble to grow those exact same grasses in my lawn. The second and even more basic qualification is the reminder that people are not plants to say nothing of their being weeds. (That’s why I so dislike the term “cultivate” when referring to prospective donors or friends.)

To return to the analog: there are leaders who, when faced with significant opposition in the community they are serving, seem to take the view that those difficult community members, those that oppose them, need simply to go away, as though they were weeds.

This is a fundamental mistake. Those community members have their own important contributions to make. It may be, that contribution needs to be brought back into balance with the needs and perspectives of other members of the community, even those views (perhaps especially those views) of the more retiring members of the community. I believe that a better approach, is the patient approach one makes to bed straw, which is, after all, a perfectly natural plant, that is both attractive and does have its own uses.

That approach would be to tend the whole field, which is to say, trim and feed the whole community, resisting the temptation to control too closely (as though we already really knew exactly what the desired outcome would be). Eventually a balanced and healthy life will return to the whole community without the need to create a pure, and doubtless, artificial homogeneity of opinion and viewpoint.

That’s one way to nurture a field of grasses as well as a field of people. Just a thought.